Our school started with only seventeen children in seven grades. In many ways we were a special family; older ones helped younger ones and we all learnt together. Much hard work was done by both the teacher and the children. Mrs Schiller helped with the younger children, using her teaching skills in a voluntary capacity to help this new fledging school. Parents worked hard to raise money for much needed equipment and did they work! Our first street stall raised over nine hundred dollars! Second–hand school furniture was purchased before our school commenced and during the early years, Pastor, Principal and a number of faithful helpers restored desks and chairs for the growing number of children. Play equipment was installed as we had working bee after working bee. The parents were an enthusiastic and proud bunch. Sel Harch had the freshly painted flagpole in place for the opening. The first year was extremely full and busy. The congregation was faced with the decision of having to buy the land running up to the back of the printers only three months after we started. This was a tough decision when less than twenty children attended the school. Some doubted if the school would grow to be much over a hundred, but in faith the decision was made to buy the land. We grew to twenty-six by the end of the first year and started the second with forty-nine children and three teachers.

The first paragraph of the first newsletter of the school (28-01-82) sums up my thoughts about the school then, what has happened since 1982 and my prayer for its future.

“God has certainly blessed us in the last few days. School has commenced in fine style, and the children are now enjoying the benefits of the thought, planning and work, which have been going on in the months and years past. May He always be in the centre of our activities and may what takes place here, always be in His name and to his glory.” 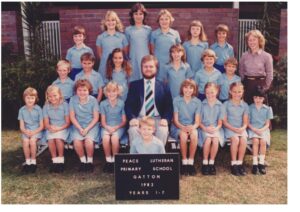